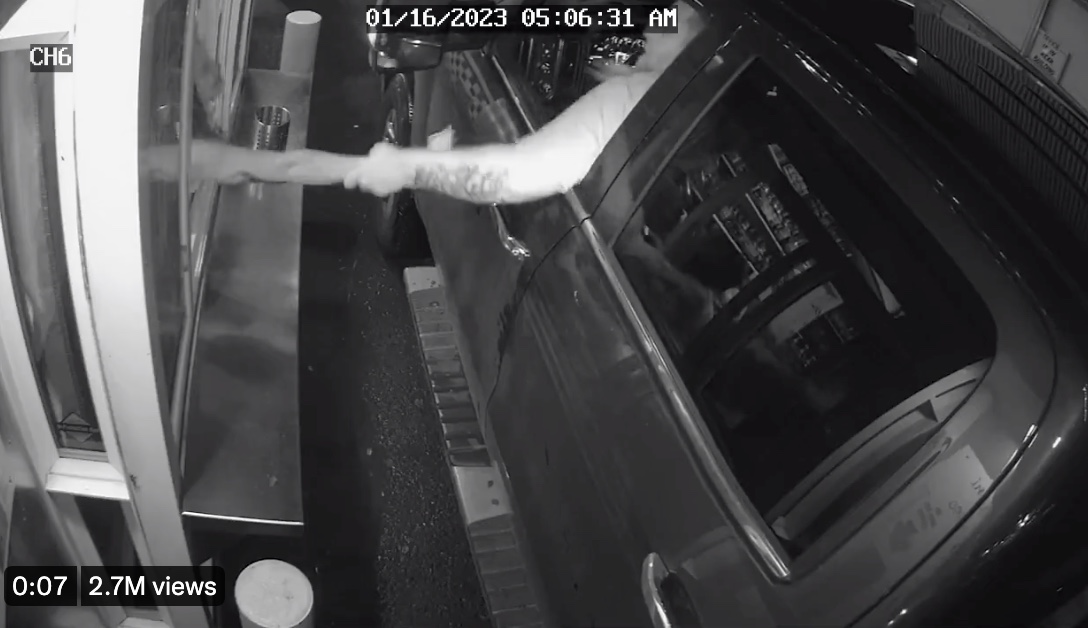 Police in Washington state have made an arrest after a man tried to abduct a barista through a drive-thru window early Monday morning.

Matthew Darnell has been charged with attempted kidnapping with sexual motivation and ordered held on a $500,000 bond, according to the Auburn Police Department.

The Auburn Police Department is asking for any information to help identify a suspect that attempted to abduct a barista during the early morning hours of 1/16/2023. pic.twitter.com/w8qzJQs5ZA

Surveillance video showed the harrowing encounter at a Beankini coffee bar in Auburn, where baristas wear bikinis to serve up coffee.

In the video, Darnell — with a distinctive tattoo on his left arm that appears to read “Chevrolet” — pulls up to pay for his coffee and instead grabs the barista by the arm and pull, then deploys what looks like a zip tie to try to drag the woman into his pickup truck. When she successfully fights back, he drives away.

Police said they found a zip tie under the seat in his truck after his arrest.

The barista, who spoke with Insider via one of Beankini’s social media accounts but did not give her name, said that the suspect ordered coffee and paid, then asked for change for a $5 bill. When she handed him the five $1 bills, she said, “he grabbed me.”

The barista told Insider that the type of establishment where she works isn’t responsible for the attempted abduction — the suspect is.

“There is nothing more we should have done or could have done to prevent this,” she said, adding that the owner “puts our safety number one, always has.” said the barista.

“We have mace, tasers, silent panic buttons, we have metal doors — extra precautions for if someone were to try to kick a door in,” said the barista, who added that she had worked at the location for several years. “We have audio, video.”

Other owners of similar establishments weren’t as confident. One such barista told KIRO she was changing the nature of her stand.

“Seeing that today, I didn’t come to work,” the barista, who works alone, said. “I was supposed to be here at 4 a.m. I keep changing my hours on social media, people think I’m being lazy but I’m not, I’m just scared.”