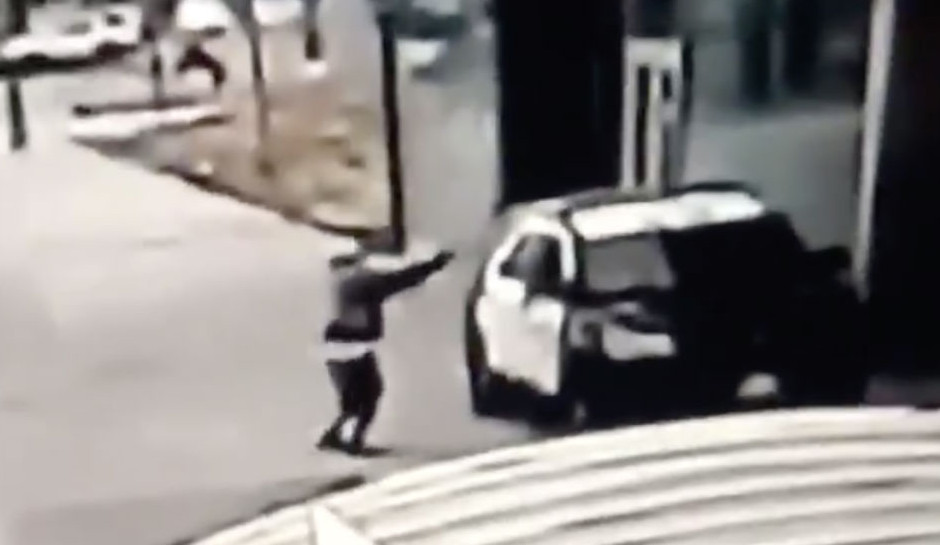 LA County Sheriff: Deputies’ survival is ‘double miracle’; hunt on for suspect who shot them

LA County Board of Supervisors authorizes $100,000 reward for information leading the arrest and conviction of the man who shot two deputies in their patrol car in Compton.

Two Los Angeles County deputies shot Saturday night while they were sitting in their patrol car are out of surgery and recovering in what Sheriff Alex Villaneuva said Sunday was a “double miracle,” the Los Angeles Times reported on Sunday.

Surveillance footage released by the sheriff’s office shows a man walking up to the deputies patrol car, shooting into the vehicle, and running away, but the Times reported on an extended version of the video as well as dispatch radio recordings from after the shooting.

The video seen by the Times shows the suspect “casually” approach the patrol car from behind, walking along a pathway near the Compton Blue Line station. As the figure nears the car, he turns to face the passenger side door, then quickly closes the distance to the car, raises a gun, and opens fire. When he’s done, he runs back in the direction he arrived and turns the corner.

The passenger door of the patrol car opens, the Times says, and a deputy stumbles out. The driver’s side door opens a short time later.

On the dispatch radio, a voice mumbles, “998 Compton Pax.” That’s the code for an officer-involved shooting, the Times says, which prompts the dispatcher to ask, “Just happened?” The reply is difficult to understand. “Compton Pax, deputies down,” the voice says. “Compton Pax 998.”

The shooting took place at about 7 p.m. Saturday, as CrimeOnline previously reported.

The county Board of Supervisors authorized a $100,000 reward for information leading to the arrest and conviction of the shooter, who was described as a Black male, 28-30 years-old, wearing dark clothing, the sheriff’s office said. LA County Capt Kent Wegener commented on the apparent stature of the suspect seen in the video, saying that the footage was recorded with a fish-eye lens that distorted his height and weight.

Villanueva said Saturday night that the deputies were alert when they arrived at St Francis Medical Care Center for treatment. Sources told the Times that one was shot in the face and the other in the head.

Although he has not yet identified them, Villaneuva said one of the deputies is 31-year-old woman with a 6-year-old son, and the other is a 24-year-old man. Both have been on the job for 14 months, graduating from the same academy class, he said.

The Los Angeles County Sheriff’s Department has come under fire for recent deputy-involved shootings — including the killing of Dijon Kizzee, 29, when deputies tried to stop him for a traffic violation while he was riding a bicycle — but Compton residents largely told the Times that Saturday night’s shooting made little sense.

Setif Capelton, 22, said he heard the gunfire and said such a shooting “hurts this community more than anything else.”

Omar Williams, 40, told the paper that he’d participated in protests earlier in the summer and believes police abuses “shouldn’t be forgotten.”

“But I’ve got to remember this,” he said, “as much as I remember the killing of an unarmed Black person by the police.”

On Sunday, Villaneuva said that detectives were looking for more surveillance footage in their search for the suspect.

“There is no rhyme or reason to it; it is an act of a coward,” the sheriff said. “Obviously tensions were running high in the neighborhood with the deputy-involved shooting. But there is no nexus to it at this time. We are chasing all leads.”