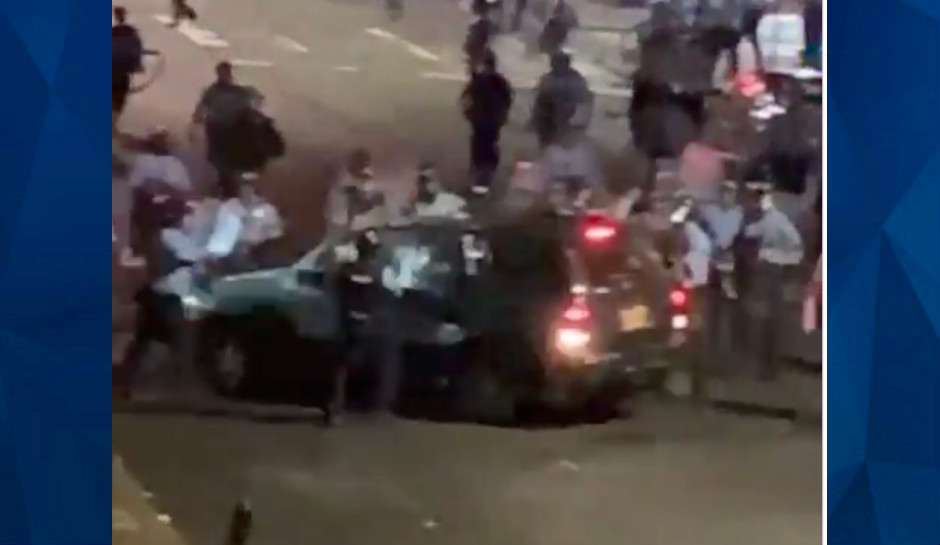 SEE IT: Philly cops swarm mom’s SUV during protest, smash windows, drag her out, and take toddler away

Philadelphia police have opened an internal affairs investigation after a video showed multiple officers smashing the windows of an SUV driven by a Black mother with her 2-year-old son and 16-year-old nephew inside during protests over the killing of Walter Wallace Jr., NBC Philadephia reported.

Rickia Young had driven into the protest area early Tuesday morning to pick up her nephew, who was with friends, and brought the toddler along rather than leave him home alone, her attorney, Kevin Mincey, said. Taking her usual route home, the 28-year-old home health aide encountered “a standoff between the officers at 52nd Street … and the different protesters and whoever else was out there in confrontation with the police,” Mincey said.

Police ordered her to turn back, Mincey said, and she started to back up to turn around but police “swarmed her car,” smashing the windows with batons before taking Young, the nephew, and the toddler out of the car.

Young was taken to police headquarters and treated at a hospital for multiple bruises and a bleeding head wound. While in the backseat of the police cruiser, she used the cell phone of a teenager who had also been detained to call her mother, who went searching for the 2-year-old, finally finding him in the backseat of a police cruiser near City Hall, four miles from where the incident took place, according to CBS Philadelphia.

The toddler, who is hearing impaired, was in his car seat with a welt on his head, broken glass in the car seat, and without his hearing aids.

At one point, the National Fraternal Order of Police posted on Facebook a photograph of the boy in the arms of a police officer. The text with the photograph said the boy “was lost during violent riots in Philadelphia, wandering around barefoot in an area that was experiencing complete lawlessness.” The FOP eventually took the post down, with a spokeswoman saying, “The National FOP subsequently learned of conflicting accounts of the circumstances under which the child came to be assisted by the officer and immediately took the photo and caption down.”

“They’re implying that a community of people were out and about, running past a 2-year-old child that was out at 1:30 in the morning barefoot and didn’t care about them,” another attorney, Riley Ross, told the NBC affiliate. “And the police were the only ones who cared, when in fact, the police were the only ones who put this child in danger. They traumatized his mother, smashed in the car windows, pulled her out, assaulted her. They traumatized the [woman’s] nephew, smashed in the windows, pulled him out, assaulted him. And they traumatized this child, by keeping this child away from his mother.”

Mincey said that Young’s vehicle, which contained her purse, wallet, and the hearing aids, has not been located.

“That car we assume, has been destroyed …We do not know where the car is. Police have not attempted to inform us where the car may be recovered,” he said.

Philadelphia Police Commissioner Danielle Outlaw said one officer seen in the video has been taken off street duties while an investigation is under way.

“As soon as it was brought to my attention, an Internal Affairs investigation had been initiated,” she said Friday, according to the CBS affiliate. “Since that time, we’ve identified the officer responsible or the one that we see using the strikes against the car. That officer has since been placed on restrictive duty pending the outcome of the investigation.”

“I still don’t know all of the details but I will tell you after reviewing the video, what I saw was quite concerning,” Outlaw told the NBC station. “But I’m very careful about what I say because I don’t know all the circumstances around it as far as what led up to it, again what the officers experienced or what they will be saying in their Internal Affairs interview. But with that said, I’d only be speculating right now, but I will say what I saw was rather concerning.”

Young was eventually released by police without charges, but a bracelet police put on her at headquarters said she was detained for allegedly assaulting police, said Mincey, who said his client plans to file a civil rights lawsuit against the city.

The protests in Philadelphia started Monday, after two officers shot and killed Wallace, 27, when he walked toward them carrying a knife and refused to drop it, police said. Wallace’s family has said he was having a mental health crisis.