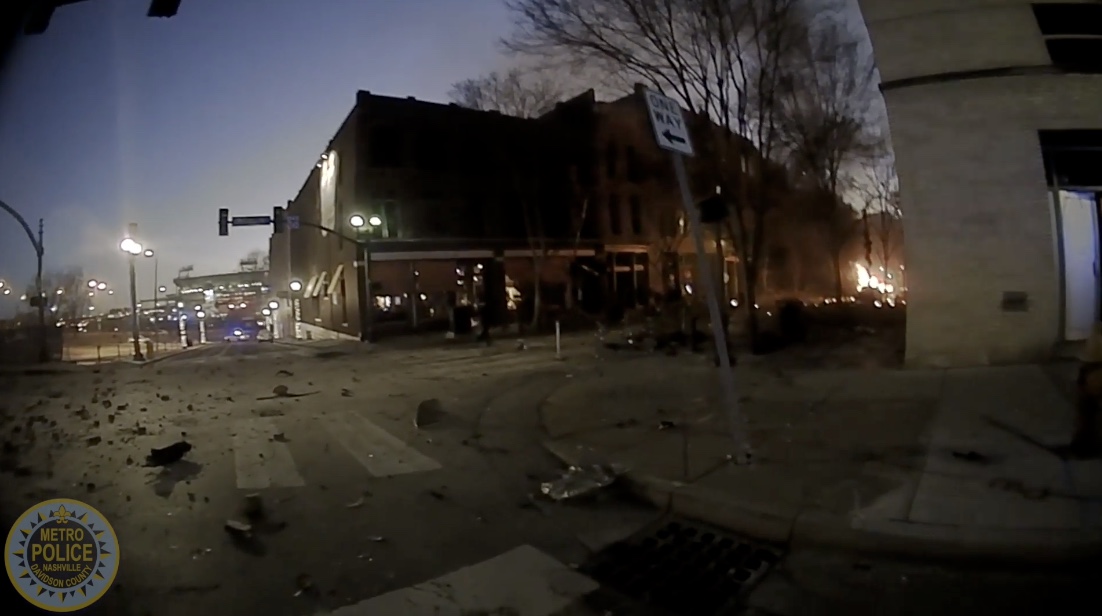 Metro Nashville Police Monday released the body camera footage of one of the officers who responded minutes before an RV camper parked on a downtown street exploded, killing the bomber who was inside. The blast destroyed a block, but bomber Anthony Warner was the only fatality. Three other people were hospitalized with non-life-threatening injuries.

Officer Michael Sipos’s body cam footage begins at 6:14 a.m. with officers asking homeless people to leave the area, taking pains to explain they’re not in trouble. At 6:25, officers are walking down the deserted street toward the RV, its ominous message playing on loop. Sipos and his partner walk past the RV; an officer explains that the camper is parked next to a building that houses all the hardline phone equipment that operates “throughout the southeast.”

They turn the corner away from the RV and walk another block, reaching their patrol car. Sipos has just opened the trunk the RV detonates. Car alarms blare, the sound of metal debris crashing back onto the streets is heard.

Sipos puts on a vest and runs to join other officers. A dispatcher calls for an immediate roll call. Officers guide away people who were still in the area when the blast took place, including a man carrying a young girl. Small explosions are heard; one of the officers says it “could be ammunition.” A dispatcher warns officers “do not get in the open on 2nd Avenue.”

Fire personnel arrive; officers check on each other. Heavy black smoke rises into the pre-dawn sky. Sipos returns to the corner where his car is parked, guiding people away from the scene. “Keep going. Keep going that way,” he says. “Please.”