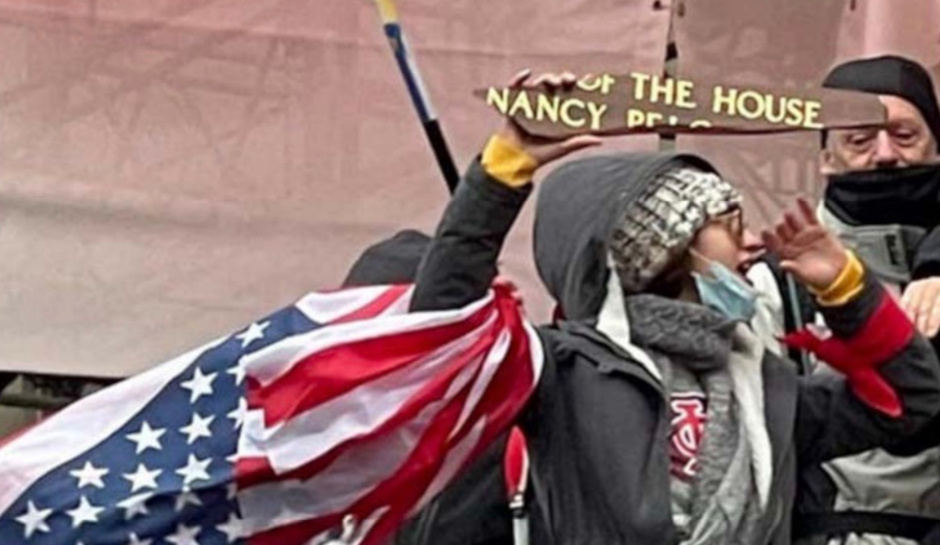 Federal authorities have identified a woman they say made off with the broken nameplate from above House Speaker Nancy Pelosi’s door during the violent, pro-Trump mob attack on the US Capitol last week.

Emily Hernandez, of Sullivan, Missouri, has not been taken into custody, the St Louis Post-Dispatch reported, but a complaint filed in U.S. District Court in Washington charges her with knowingly entering a restricted building without lawful authority and knowingly engaging in disorderly or disruptive conduct in a restricted building with intent to impede or disrupt the orderly conduct of government.

A statement of facts filed with the complaint says that Hernandez was identified by several tipsters and anonymous reporters, including some who saw her posts about her activities at the Capitol on Snapchat.

Initial images of Hernandez with the sign came from inside the Capitol and were taken by ITV News. Other tips came in to the FBI showing Hernandez displaying her trophy outside the building.

The FBI said it compared Hernandez’s Missouri driver’s license photo to the multiple photos of her at the Capitol and determined a match.

Five people died in last week’s violence, including a US Capitol Police officer. Dozens of people — including police officers and ex-military members — have been arrested, and authorities are investigating dozens more.

On Wednesday, the House of Representatives impeached Donald Trump for the second time, charging him with inciting the insurrection, as CrimeOnline reported. The Senate is unlikely to take up the matter until after Joe Biden and Kamala Harris are sworn in as the new president and vice president next week.

Trump, meanwhile, met Friday with My Pillow CEO Michael Lindell, who was seen entering the White House with notes about declaring martial law, invoking the Insurrection Act, and replacing CIA Director Gina Haspel with Trump loyalist and former aide to Rep Devin Nunes Kash Patel, who was named chief of staff to the Defense Secretary in a purge of civilian Pentagon staff in November, the Washington Post reported.

Also Friday, Pelosi named retired Lt Gen Russel Honoré, who commanded the military’s response to Hurricane Katrina in 2005, to review security at the Capitol in the wake of the January 6 attack, NBC News reported.

“We must subject this whole complex though to scrutiny in light of what happened and the fact that the inauguration is coming. To that end, I have asked Retired Lt. Gen. Russell Honoré to lead an immediate review of security infrastructure, interagency processes and command and control. The general is a respected leader with experience dealing with crises,” Pelosi told reporters at her weekly press conference.