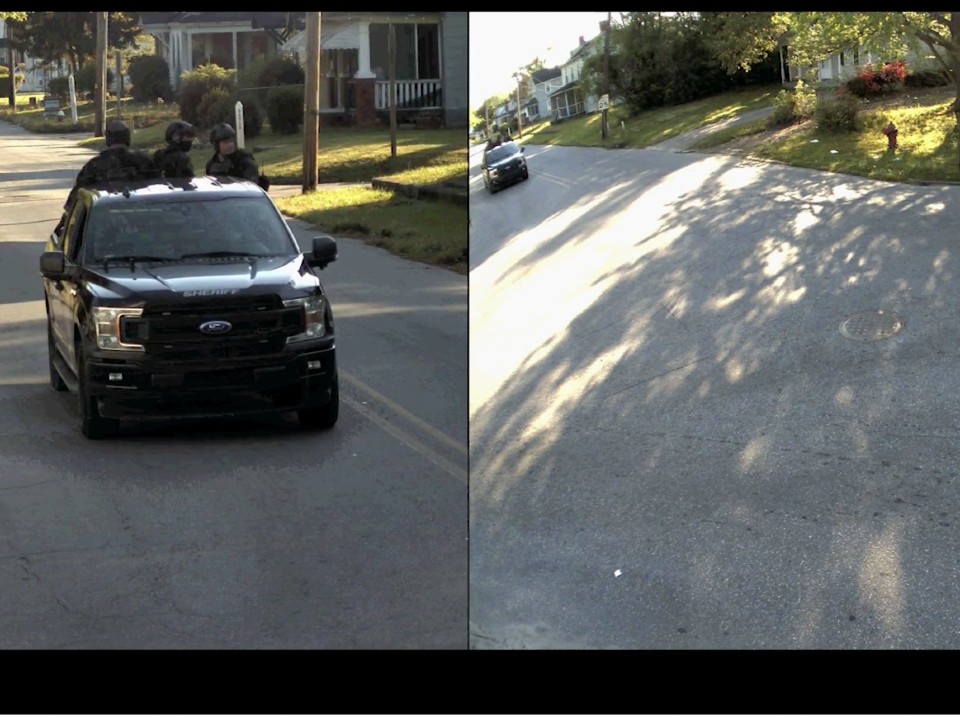 Police in Elizabeth City, North Carolina, have shared surveillance camera video with a local news station that show deputies driving to serve a warrant for Andrew Brown, Jr. just seconds before the audio cuts out — reportedly due to the sound of gunshots.

Brown, 42, was fatally shot on April 21 by sheriff’s deputies attempting to serve the warrants connected to a yearlong drug investigation. Early reports indicated that Brown was shot as he was driving away from the scene, but the timeline of events remains unclear as questions mount about when and why deputies began shooting at Brown, who was reportedly unarmed.

The WAVY report describes the footage as “city-owned,” and a WAVY staffer said on social media earlier Wednesday the footage came from “a government camera on a light pole” near Brown’s residence.

The footage shows a truck carrying sheriff’s deputies moving at a moderately high speed, followed by several unmarked vehicles. The vehicle drives toward a residence believed to be Brown’s–the angle and distance do not allow for a detailed view of what transpired at the scene of Brown’s death. The audio cuts out at the 23-second mark and less than ten seconds after the sheriff’s vehicle is seen stopping at or near the residence.

According to the WAVY report, the audio and video glitches are believed to correspond with gunfire at the scene of Brown’s fatal shooting. The Elizabeth City police chief reportedly told the news station that the loud sounds caused the glitches.

Once the video settles and the sound resumes, multiple people who appear to be connected to law enforcement are seen in the frame. While much of the audio is indecipherable, a voice can be heard saying “shut this area down.”

As CrimeOnline previously reported, Brown’s family and his attorneys were permitted to view about 20 seconds of police body cam footage at the Pasquotank County Sheriff’s Office on Monday. In a press conference following the viewing, the attorneys claimed that shots were already being fired at the start of the clip they were shown, and that Brown can be seen with his hands on the steering wheel of the car as deputies are firing.

On Tuesday, the attorneys gave another press conference to deliver the results of an independent autopsy report. The pathologist hired by Brown’s family determined that Brown had been shot five times — four times in the arm, along with a fatal gunshot to the back of the head that penetrated his skull and brain.

“I want answers about what happened as much as the public does. The private autopsy released by the family is important and I continue to pray for them during this difficult time. However, a private autopsy is just one piece of the puzzle. The independent investigation being performed by the SBI is crucial and the interviews, forensics, and other evidence they gather will help ensure that justice is accomplished.”

As previously reported, Wooten confirmed late last week that three deputies had resigned and seven were on administrative leave following the fatal shooting. The sheriff said that none of the three who resigned were involved in the shooting, and that one of the three was nearing retirement.