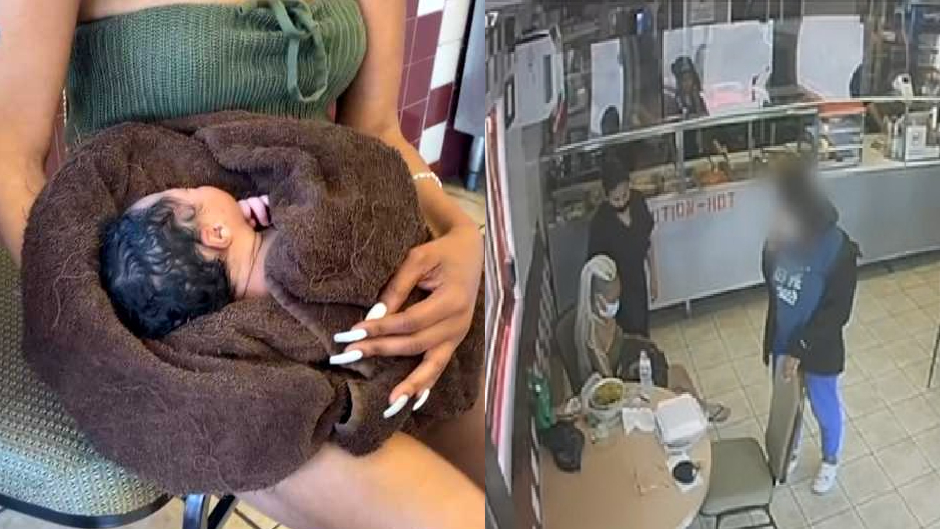 UPDATE: Parents of ‘desperate’ 14-year-old girl who gave newborn to stranger will take baby in [Report]

The couple who were handed a newborn by a 14-year-old girl at a New Jersey restaurant on Wednesday said the teen’s parents are expected to take the baby in.

In a Facebook live broadcast, Alease Scott recalled the girl walking into El Patron restaurant in Jersey City and asking for help. Scott says the girl asked people behind the front counter for help but no one responded.

That’s when Scott says she noticed the teen holding a baby wrapped in a towel. The teen let Scott see the baby so she could check her vitals.

“The baby had a color but I just saw that the breathing was a little bit labored,” Scott recalled, noting the baby appeared as if she was in a deep sleep.

Scott said she realized the girl was the baby’s mother after seeing blood on her leg. The girl reportedly gave Scott a fake name before fleeing the restaurant as Scott assessed the baby — whose umbilical cord was attached.

“She was just so scared,” Scott says. “All I saw was a child who just didn’t know what to do and made a very bad decision that worked out … for the good of that baby.”

Police eventually located the 14-year-old girl, who initially denied being the baby’s mother. The teen and baby were hospitalized and are doing fine. The teen is not expected to face criminal charges.

Initial reports indicated that the baby girl will be put up for adoption. However, Little-Cocca said the teen’s parents are now aware of her giving birth — and are expected to take in the infant once they are cleared by the Department of Children Protection and Permanency.

Scott said she “fell in love” with the newborn, who she named Angel, but she is not taking her in. Scott said she is unsure whether she will see the baby again, but detectives are providing her with updates.

“I didn’t know she was 14 years old when she dropped the baby off to me,” Scott says during Wednesday’s live stream. “We don’t know what she went through. We don’t know how she ended up in that state.”

In New Jersey, Safe Haven laws allow a parent (or someone acting on their behalf) to leave a baby less than 30 days old at any hospital emergency room, police station, fire station, ambulance, first aid or rescue squad  — no questions asked. The state Department of Children and Families will place the infant in a foster or pre-adoptive home.