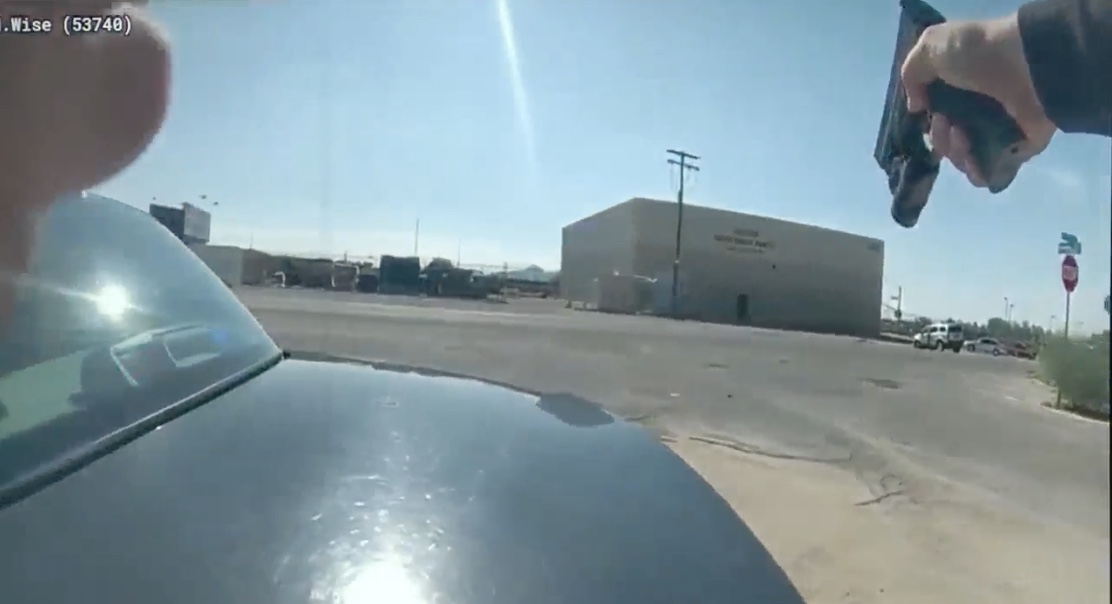 Two people were killed — an unidentified person in a house fire and a neighbor shot by the gunman — and three first responders and a neighbor were wounded.

“We’re being shot at!” a Tucson fire captain shouted into his radio Sunday afternoon as he ordered his crew to take cover. And they did — climbing into emergency vehicles, even fleeing into the homes of residents who opened their doors to them as the shooter walked around a ladder truck firing at anyone who moved.

By the time the gunman left the scene — fleeing in his SUV — the captain and a neighbor had been wounded and another neighbor was dead, as CrimeOnline previously reported. And there was more.

Before he began shooting at firefighters, the suspect — identified as 35-year-old Leslie Scarlett — had opened fire on emergency medical technicians waiting in the ambulance about a mile away on an unrelated call. A 20-year-old EMT was critically wounded and is “fighting for his life,” Tucson Police Chief Chris Magnus said, and his 22-year-old partner was hit in the chest and arm. She is in serous but stable condition.

Magnus said Scarlett had been at the house but left before firefighters arrived, came upon the ambulance, and shot the EMTs. Then he returned to the scene of the fire and began shooting at firefighters and neighbors alike before again taking off in his SUV.

Police were looking for Scarlett, but he found them, ramming a cruiser driven by Officer Danny Leone, an 8-year veteran. Leone jumped out of his vehicle and took cover, while Scarlett fired three rounds in his direction. Leone returned fire, striking Scarlett, and rushed to provide first aid until medical personal arrived and took him to the hospital.

Meanwhile, firefighters finally extinguished the blaze at the southeast Tucson house and found a badly burned body inside. Magnus said the body was too badly burned to make any determination about the sex, age, or identity. But, he said, a woman who lived at the home with three children remains unaccounted for and is “presumed dead.” The children were located and placed with family, he said.

“Yesterday we saw a nightmare scenario play out,” Magnus told reporters at a Monday afternoon news conference, noting that the entire situation created “a level of chaos that made the situation extremely challenging.”

Magnus identified the dead neighbor as 44-year-old Cory Saunders and said his 11-year-old son witnessed his father’s shooting. He did not identify the wounded EMTs or the fire captain. The wounded neighbor was grazed by a bullet, he said.

Detectives have not yet determined the relationship between the residents of the house and Scarlett, the chief said. He described Scarlett as a “prohibited possessor” of a firearm who spent six years in prison for armed robbery and has a history of mental illness. They have also not discussed a possible motive.

At Monday’s news conference, Magnus played audio from the firefighters arrival at the house fire and body camera footage of Leone’s encounter with Scarlett, calling the firefighters and Leone heroes. But, he said, “if this incident isn’t a call to action, I am really not sure what is.”

“The real question we should be asking is how can be coordinate the work of our criminal justice and mental health systems to prevent these terrible attacks? Who are these ticking time bombs and is there anything we can do, working together instead of in silos, to predict their level of risk?” Magnus said. “How does someone, like the suspect in this case, a prohibited possessor even come to have a firearm? There are many unanswered questions right now that need to pursued further in the days to come.”