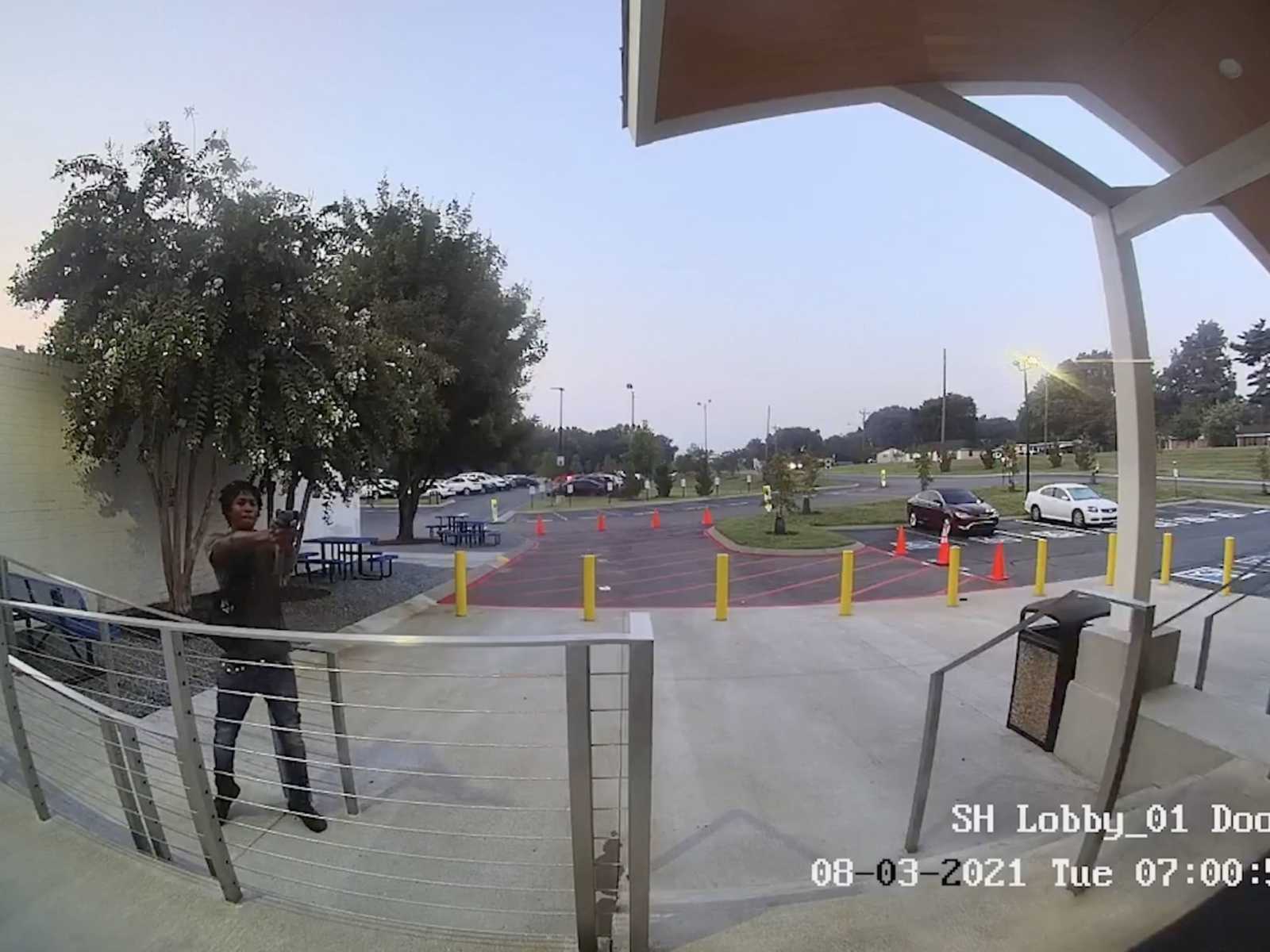 A workplace shooting in Nashville early Tuesday morning left three people wounded and the shooter dead in the middle of the street after an encounter with police.

Two security guards at the SmileDirectClub warehouse — Johnny Hardin, 46, and Carlton Watson, 66 — were hospitalized, Hardin in critical condition and Watson in stable condition. Fifty-four-year-old Thomas Abbott, a manager at the facility, was treated and released, WKRN reported. Another employee injured a leg running away.

Police said King entered at shift change — about 6 a.m. — and began firing, but no one was hit. He exited the building and engaged in a shootout with security guards through the doors, firing more than 20 rounds. Metro police said they believe King was hit during the exchange of gunfire as well.

As 911 calls came in to dispatchers, King began to walk across the parking lot. “He’s shooting everywhere,” one caller said, and another described the shooter and kept the dispatcher apprized of his movements until police arrived.

Metro Nashville Police released the 911 calls and body camera footage from two officers who opened fire during the incident. The body camera video shows officers following King down the sidewalk, repeatedly calling for him to drop his gun. With officers approaching from several angles, King stopped in the middle of an intersection and turned toward Officer Dylan Ramos and Officer Cherell Kinchloe. When he pointed his gun at the officers, they opened fire.

Officers handcuffed King and rendered aid until an ambulance arrived to take him to the hospital.

Police spokeswoman Kristin Mumford said the Tennessee Department of Investigation is reviewing the incident. The department itself is looking at the shots Kinchloe fired “given the vantage point represented by her video.”

SmileDirectClub, which manufactures a home teeth straightening system, said in a statement it was “saddened” by the shooting and was cooperating with the investigation.

King used a .45 caliber semi-automatic handgun and apparently had multiple clips in a sling pack he carried, police said.

Police said King, who worked the day shift at the warehouse, had been working there since June but had previously worked at the facility from late 2019 to early 2020.

King’s family said the man suffered from a mental illness but they were unaware of its severity:

“The heart of our family is broken at the news of the shooting at Smile Direct Club. For the families impacted by the shooting we cry and pray with you. For those who were injured and frightened by the event we empathize with you and pray for you. When we say we are praying for you, it is not a cliché, it is heartfelt.

“Antonio King was a quiet, caring, fun loving, and hardworking young man, the actions of this tragic event do not display the true character of Antonio. The reality of his mental illness has taken us by surprise, unfortunately the signs of the severity of the illness were not evident to those of us who were with him daily. It is important for us as a community to be aware of how mental illness can manifest itself in our loved ones and friends. In the days that we live in where it is so easy to shame, belittle, berate, and criticize others without knowledge of how they struggle daily. We must find compassion and be starkly aware of the need for life giving intervention that builds each individual in our community.

“Our deepest sympathies and prayers for the speedy recovery of those injured and everyone else who was involved, as we mourn the loss of Antonio.”

Meanwhile, SmileDirectClub employees were trying to understand what happened. One woman told WKRN she was still shaking 90 minutes after the incident — and she had been at the far end of the building.

Esperance Borota, who  has worked at the warehouse since 2019, said she was late to work Tuesday morning and arrived just after King opened fire.

“I feel sad and it’s scary, I’ve been talking to people who have been crying,” she said.

Another employee, Lomoro Soroba, said he used to work on the same production line with King.

“He’s a good quiet guy, I don’t know what happened,” Soroba said. “It’s so sad and he’s just gone. His life ended. Someone said he asked police ‘why are you following me?’”

And yet another witness told the station King asked people inside the building why they were running from him.