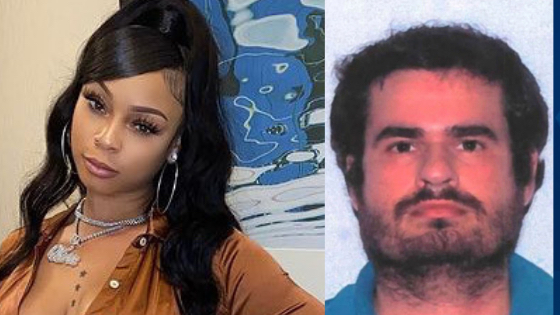 Killer writes rambling messages on the wall, professing love for the victim.

A Florida man allegedly stalked and murdered a Texas social media influencer before stabbing himself to death.

As CrimeOnline previously reported, authorities found the body of 33-year-old Jenae Gagnier on Sunday, in her apartment in Richmond, Texas, just west of Houston. Gagnier was widely known as Miss Mercedes Morr on Instagram, where she had 2.6 million followers.

The woman’s father, Mark Gagnier, told KTVT-TV. that he went to check on his daughter Sunday after being unable to reach her all weekend.

“I know my daughter and when I got to my daughter’s house and it was locked up and she’s not answering my phone call, which is not like her, I knew something was up,” Mark Gagnier told the television station. “So I didn’t hesitate to kick the door down. What I saw, I wouldn’t want any parent to go through.”

Mark Gagnier said he found his daughter’s body at the bottom of a staircase.

“I walk in and Janae’s on the floor, and her clothes are all torn up and stuff,” Mark Gagnier told the television station.

He then found the alleged killer upstairs.

“I go upstairs, guy upstairs with a knife in him, still alive,” Mark Gagnier told KTVT-TV.

The Richmond Police Department identified the suspect as 34-year-old Kevin Alexander Accorto, whose last known address was in Florida. The medical examiner determined that he stabbed himself to death.

Investigators have not yet identified a motive for the killing, however, police say Jenae Gagnier and Accorto did not have a personal relationship.

The woman’s parents believe Accorto was a crazed follower. Mark Gagnier told KTRK-TV that Accorto wrote rambling messages on a wall in his daughter’s apartment professing love for her and confessing and apologizing for killing her.

“Unfortunately, someone basically was stalking and killed my baby,” Jeanetta Grover, the victim’s mother, told KTVT-TV.

It is not clear how Accorto located Jenae Gagnier, which police are investigating. Mark Gagnier told KTRK-TV that his daughter’s presence on social media worried him.

Funeral services are set for Saturday, according to an obituary.

“She was a beacon of light to the world,” the obituary reads. “Jenae was a loving daughter, sister, auntie, niece, cousin and friend to so many individuals. She will forever remain in the hearts of those who cherished and loved her and continue to be an inspiration to women around the world.”