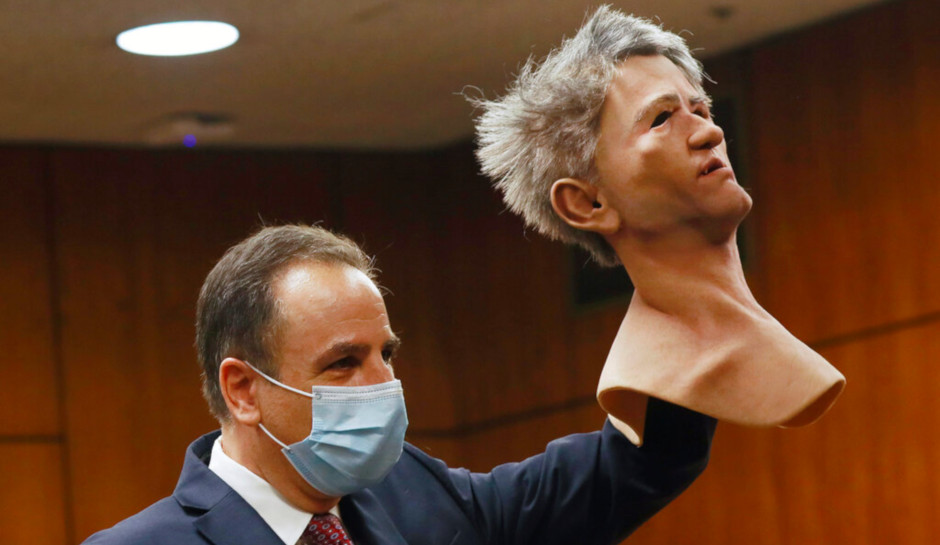 Prosecutors displayed latex mask they say the real estate heir planned to wear as he fled to ‘get away with murder.’

A prosecutor hoisted the latex mask found — alongside tens of thousands of dollars and a fake ID — in Robert Durst’s New Orleans hotel room when he was arrested in 2015, reminding jurors in his murder trial that he planned to flee but police caught up to him first.

Durst is on trial for the 2000 murder of his lifelong friend Susan Berman, who, prosecutors say, was about to admit to authorities that she provided him a false alibi for the disappearance and presumed death of his wife, Kathie Durst, in 1982, as CrimeOnline previously reported.

The real estate heir was the subject of the 2015 HBO series “The Jinx.” He was arrested just before the last episode aired — and after he muttered on a live mic, “What did I do? Killed them all, of course.”

Deputy District Attorney Habib A. Balian said in his closing argument that Durst “wiped away” Kathie Durst as she prepared to divorce him and turned to Berman for help, Fox News reported.

Durst was previously acquitted of the 2001 murder of Morris Black. Black was an elderly neighbor in Galveston, Texas, who learned Durst was on the run. Durst admitted killing Black and chopping his body up to throw into the Galveston, but he testified the killing happened accidentally during a struggle over a gun, and the jury believed him, even though he jumped bail and fled before the trial began.

With no forensic evidence to tie Durst to Berman’s death, the prosecution has relied on circumstantial evidence, including statements made by Durst himself. During his own lengthy testimony during the trial, Durst said that he hadn’t killed his wife or Berman, and then said if he had, he wouldn’t admit it.

“If you’ve said you’ve taken an oath to tell the truth, but you’ve also just told us that you would lie if you needed to,” Los Angeles District Attorney John Lewin asked, “can you tell me how that would not destroy your credibility?”

“Because what I’m saying is mostly the truth,” Durst replied. “There are certain things I would lie about, certain very important things.”