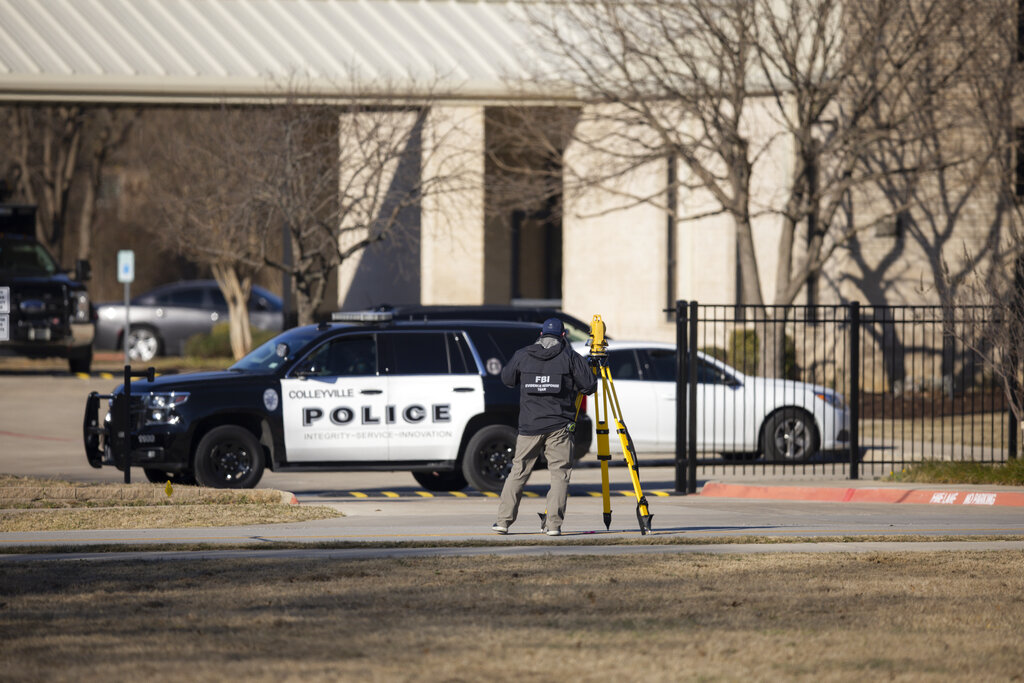 The suspect demanded that Aafia Siddiqui be released from prison. After her trial, the convicted terrorist demanded that jurors be given DNA tests to determine if they had Jewish heritage

All hostages have been freed after they were taken captive Saturday at a Texas synagogue by a man who reportedly demanded that a convicted terrorist with a history of anti-Semitism be released from prison, the Fort Worth Star-Telegram reports.

“Prayers answered. All hostages are out alive and safe,” Gov. Greg Abbott tweeted on Sunday.

The situation came to a dramatic conclusion around 9 p.m. Saturday, when an FBI hostage rescue team breached the building. WFAA-TV captured video showing several hostages running out of the building and someone holding a gun partially exit and then return inside.

Moments later, the television station recorded footage of a loud blast that briefly illuminated the darkness outside of the building, followed by multiple other bangs. A SWAT team was clearly visible moving around the perimeter.

The suspect, whose identity has not been released, entered Congregation Beth Israel in Colleyville just before noon local time. The man was claiming to have bombs in unspecified locations.

Local, state and federal authorities descended on the scene, including the FBI and the Bureau of Alcohol, Tobacco, Firearms and Explosives. Residents who live nearby were evacuated.

Four hostages were initially held captive, but the suspect released one hostage uninjured around 5 p.m. By 9:30 p.m., authorities said all the hostages, including a rabbi, were out of the building without physical injury.

FBI Dallas Special Agent in Charge Matt DeSarno told reporters at a press conference that the suspect died in a “shooting incident,” but details were not released about whether police shot the man or if he shot himself, according to NBC News.

Authorities have identified the hostage-taker, but his identity has not been released publicly.

Investigators have not said publicly whether the man actually had explosives, although he was reportedly carrying backpacks.

Negotiators had been working to ensure the safety of the hostages and de-escalate the situation, at one point ordering the suspect food.

DeSarno would not say what specifically prompted the hostage situation, but told reporters, “We do believe that, from engaging with the subject, he was singularly focused on one issue and it was not specifically related to the Jewish community,” according to NBC News.

However, multiple sources told ABC News that the man was demanding release of Aafia Siddiqui, a Pakistani neuroscientist who was convicted of the assault and attempted murder an American soldier in Afghanistan. Siddiqui was found in Afghanistan in 2008 with documents about explosives and American landmarks. While she was being interrogated, she reportedly got a hold of a rifle and started firing on soldiers, according to the Associated Press.

Saturday’s synagogue service was being live streamed online when the man took the hostages. A partial recording of the livestream appears to have captured audio of a man speaking in broken English with negotiators and demanding that a woman be set free from prison.

American intelligence officials allege that Siddiqui is a terrorist who has ties to the September 11 attacks. Counter-terrorism experts have labeled her “Lady al-Qaeda,” while U.S. officials once said she was “the most wanted woman in the world,” according to the Star-Telegram.

Siddiqui, who has been diagnosed with paranoid schizophrenia, reportedly uttered anti-Semitic outbursts during her trial in New York City in 2010 and demanded that jurors’ DNA be tested for Jewish heritage, according to Courthouse News Service.

Siddiqui is serving an 86-year prison sentence and is being held at Federal Medical Center Carswell in Fort Worth for medical treatment after she was seriously injured when an inmate attacked her in July, the AP reports.

ABC News initially reported that the hostage-taker was referring to Siddiqui as his “sister,” even though they may not actually be siblings. A lawyer for Siddiqui’s actual brother told ABC News that he was in Houston at the time of the hostage situation and was not involved in the matter.

At this point, there is no evidence that what happened Saturday is part of a larger plot, according to ABC News. However, police departments across the country have ramped up patrols near synagogues in response.