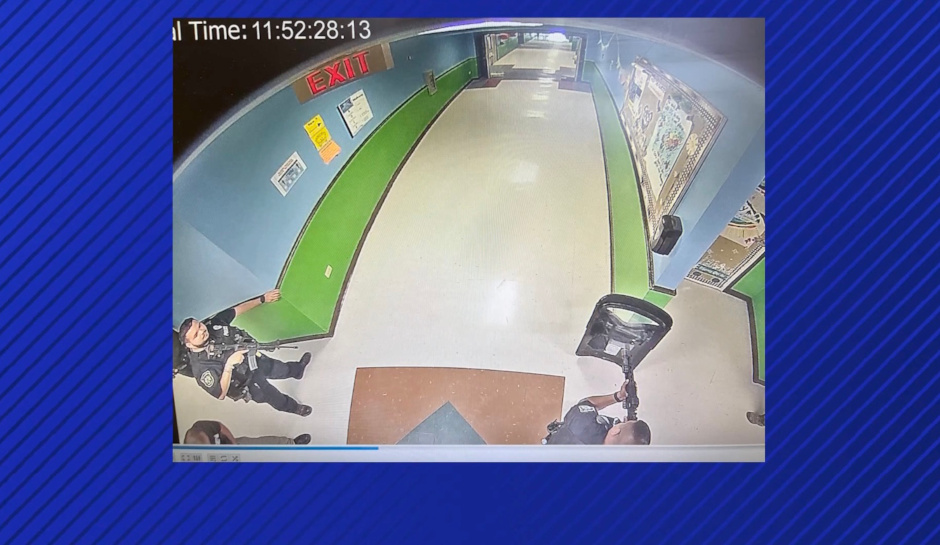 Transcripts, Video Show Officers Ready To Breach Uvalde Classroom Door – But No Order Was Given

A review of law enforcement transcripts and security camera footage raises more questions than it answers about the police response to the massacre of 19 children and two teachers at a Texas elementary school last month.

The review, conducted by The Texas Tribune, shows multiple officers in the hallway of Robb Elementary school on May 24 after 18-year-old Salvador Ramos had entered classrooms 111 and 112 and begun shooting. Some of the officers were anxious to enter, and the transcripts reveal they had the tools they needed to breach the classroom doors — which may not have been locked.

But still, the officers waited 77 minutes for an order to enter the classroom that never came before a Border Patrol tactical team entered and killed the gunman, as CrimeOnline previously reported.

The transcripts reveal some confusion over just who was in charge during the siege inside the school. Texas state officials unequivocally said that Uvalde school district police chief Pete Arredondo, who was sworn into a city council seat shortly after the massacre, was in charge, although Arredondo said in subsequent interviews he was not. He had rushed to the school and was in the hallway when he called the city’s dispatch unit at 11:40 a.m. to give an update.

Arredondo told dispatchers “we don’t have enough firepower right now” to confront the gunman, armed with an AR-15. He said the officers in school had only pistols, although at least two officers were seen carrying rifles on the video when the chief called dispatch. Arredondo also asked for someone to bring him his radio, which he’d left behind because it was cumbersome.

Leaving behind the radio meant he had no idea that children were calling 911 begging for help. It’s not clear if any other officers in the building had radio access.

Twenty minutes after the shooting started, a state special agent entered the hallway and asked if there were children inside.

“It is unknown at this time,” came the reply from an officer, either from Uvalde city or the school district.

“Whoever is in charge will determine that,” the officer replied.

The special agent was stunned. He pointed out children in other classrooms who needed to be evacuated.

Other findings from the Tribune’s review include:

According to the transcripts, Arredondo tried to talk with Ramos at 12:38 p.m. — 65 minutes after the gunman had entered — but got no reply. At 12:46, he told a SWAT team they could breach the classrooms if they were ready, KVUE reported. They did so four minutes later.

[Featured image: Two officers with rifles, one with a ballistic shield, inside Robb Elementary School at 11:52 a.m., 20 minutes after a gunman entered the school/KVUE screenshot]