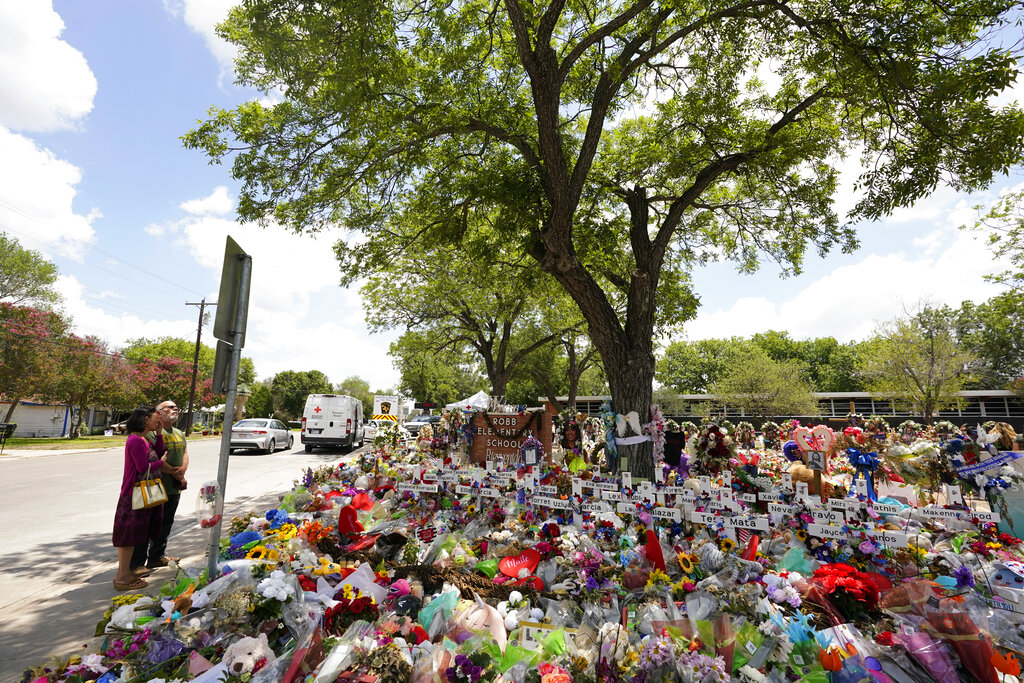 Recently released body camera footage shows police restraining a fellow officer who was trying to rescue his wife in her classroom at Robb Elementary where she had been shot, KENS-TV reports.

School policeman Ruben Ruiz was one of the first law enforcement officers to arrive at the Uvalde school after reports of the gunman on May 24. Soon after entering the building, Ruiz checked his phone, which led to widespread public condemnation.

But what most people didn’t know was that the gunman was in his wife’s classroom. Ruiz’s wife, Eva Mireles, taught fourth grade at the school.

Ruiz was likely using his phone to try to communicate with his wife. The body camera footage shows that while Ruiz was in a school hallway, he could hear gunshots.

“He’s firing. He’s firing,” Ruiz can be heard saying in the video, according to KENS-TV. “I can hear it clearly. They’re in my wife’s classroom.”

Over the next 15 minutes, the footage shows Ruiz going in and out of the school. The footage then shows Ruiz trying to make his way through a line of officers in the hallway near Mireles’ classroom, but the other officers won’t let him get past.

“She says she’s shot,” Ruiz says, holding a handgun as another officer puts his hand on Ruiz’s shoulder and pushes him back, according to KENS-TV.

Other officers then took Ruiz’s gun and led him out of the school building.

It would take nearly an hour for police to eventually enter the classroom. Mireles was reportedly alive but died in an ambulance en route to a hospital, according to The New York Times.

The gunman killed 19 students and two teachers and injured 17 other people.

See all CrimeOnline’s additional reports on the Uvalde school massacre.

[Feature Photo: Pecan trees, planted in the 1960’s, shade a memorial created to honor the victims killed in the recent school shooting at Robb Elementary, Thursday, June 9, 2022, in Uvalde, Texas. The Texas elementary school where a gunman killed 19 children and two teachers has long been a part of the fabric of the small city of Uvalde, a school attended by generations of families, and where the spark came that led to Hispanic parents and students to band together to fight discrimination over a half-century ago. (AP Photo/Eric Gay)]
Share Tweet