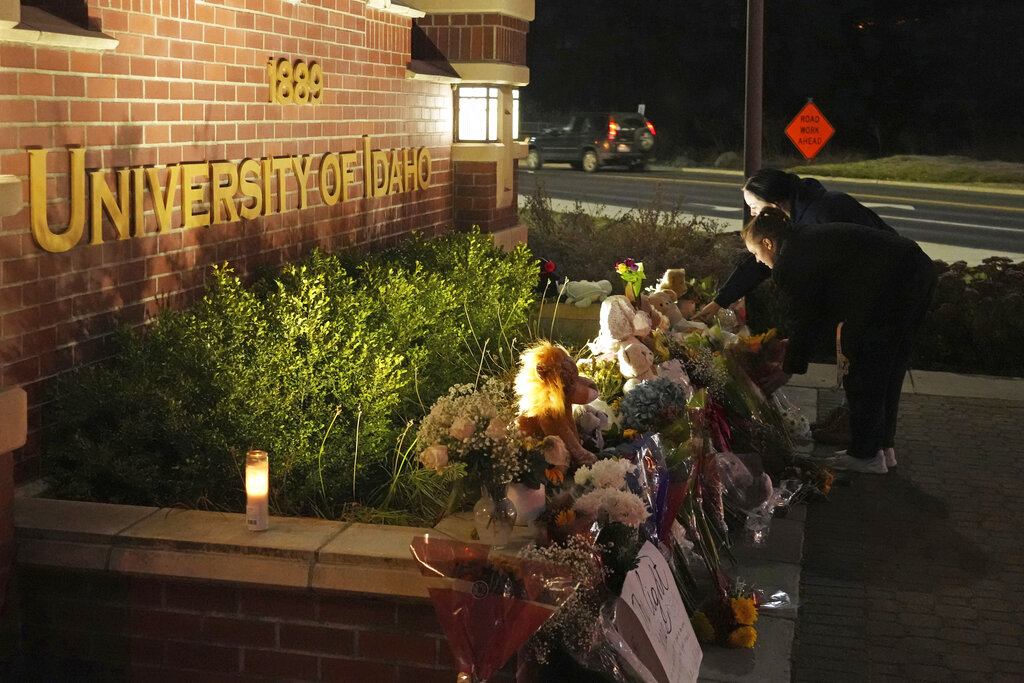 Law enforcement on Saturday returned to the home where four University of Idaho college students were murdered three weeks ago as authorities continue the hunt for the killer.

Video recorded by News Nation at the scene in Moscow, Idaho, showed three officials walking up to the house at 1122 King Road just before 5:30 p.m. local time and speaking with a police officer or security guard posted at the site.

The sun had set and it was dark outside, making it difficult to fully see what was happening. At the time investigators arrived, yellow police tape was wrapped around the home, and the windows were dark, with only a few external lights illuminating the driveway.

“Three members of law enforcement just went into the house — not sure if it’s local detectives or FBI. They walked up from somewhere and didn’t park in the driveway,” News Nation Senior National Correspondent Brian Entin wrote on Twitter.

Voices could be heard in the recording, but the statements were inaudible.

After several seconds, the group of three investigators headed toward the front door of the home. At least one of the individuals appeared to be carrying some sort of bag, briefcase, or piece of equipment. The group then shut the front door.

Moments later, News Nation captured an image of an investigator at a window.

Sunday marked three weeks since the slayings on November 13, when the students were found stabbed to death. The victims have been identified as 21-year-old Madison Mogen, 21-year-old Kaylee Goncalves, 20-year-old Ethan Chapin and 20-year-old Xana Kernodle.

Two roommates who were on the first floor were not attacked by the assailant, and police say they do not believe the surviving roommates had anything to do with the murders.

In a Twitter Space session while the investigators were in the home on Saturday, a News Nation cameraman said he went to the side of the house and saw officials inside using yellow evidence markers with numbers on them. The cameraman said he saw lights on the second floor and on the first level.

The cameraman later said the investigators turned off the lights in the house and could be seen using flashlights. Entin also said he could see investigators in “one of the downstairs bedrooms.”

“They’re looking at something in one of the downstairs bedrooms,” Entin said, noting that light was emanating from a crack in the window blinds. “It’s the downstairs left bedroom that they’re in now and we know that none of the victims were found on the downstairs floor. I don’t know why they’re focused on that room.”

By 6:49 p.m. local time, Entin posted to Twitter a video of the investigators leaving the scene, with investigators carrying paper bags out of the residence.

“Investigators leaving the house in Moscow, Idaho a short time ago. They were carrying several paper bags,” Entin wrote.

Also Saturday, before the investigators were spotted at the scene, the Moscow Police Department said it had received more than 2,600 email tips, upwards of 2,6700 calls to the tip line and nearly 1,100 digital media submissions in the investigation.

Police have not yet identified any suspects in connection with the killings.

[Featured image: Two people place flowers at a growing memorial in front of a campus entrance sign for the University of Idaho, Wednesday, Nov. 16, 2022, in Moscow, Idaho. Four University of Idaho students were found dead on Sunday, Nov. 13, 2022, at a residence near campus. (AP Photo/Ted S. Warren)]