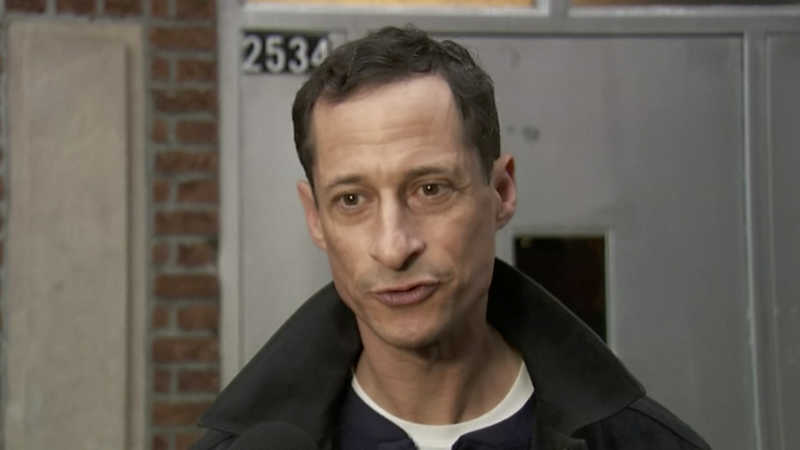 Disgraced former congressman Anthony Weiner may have found the right job for the next phase of his life: CEO of an employee-owned Brooklyn company that makes countertops using shards of broken glass. And that’s not all. IceStone, Weiner’s new company, says its “commitment to second chances goes beyond our factory and our products.” “We hire …

Shamed former congressman Anthony Weiner is out of prison: Report

Anthony Weiner was transferred to a halfway house in New York, following a prison sentence for sending sexually explicit text messages to a minor. FOX News reports that Weiner, 54, is now in a federal re-entry program based in New York, where he’ll live until his release in May. In 2017, the disgraced former congressman was …

The teen at the center of a scandal that landed former U.S. Rep. Anthony Weiner behind bars is now tied to another case that has resulted in criminal charges against a former teacher. According to the New York Post, 54-year-old Jonathan Busch was arrested on Thursday and faces charges including statutory rape. He has since …

AYER, Mass. (AP) — Former Rep. Anthony Weiner reported to prison Monday to begin a 21-month sentence for sexting with a 15-year-old girl. Weiner is being held at the Federal Medical Center Devens in Massachusetts, a Bureau of Prisons spokesperson said. The facility in Ayer, about 40 miles (64 kilometers) west of Boston, has over …

A librarian’s close observation of a Utah man’s reading habits helped detectives pin a murder charge on him. Curtis Nichols, 35, allegedly researched legal defenses before strangling his wife to death. Nichols told police he found his wife dead on their kitchen floor after leaving the home for just a few minutes. His DNA was …

“I victimized a young person who deserved better”

By TOM HAYS and STEVE PEOPLES, Associated Press NEW YORK (AP) — It seemed as if Anthony Weiner had hit rock bottom when he resigned from Congress in 2011. “Bye-bye, pervert!” one heckler shouted as the Democrat quit amid revelations that he had sent graphic pictures of himself to women on social media. Time has shown …

On Wednesday, federal prosecutors accused Anthony Weiner of convincing an underage girl to fondle herself and strip over the Internet while he watched. Court documents obtained by the New York Post alleged that the embattled ex-politician partook in three illicit Skype sessions where the victim “made clear that she was not just a minor—she was, in fact, …

Disgraced former congressman Anthony Weiner has asked a Manhattan federal court judge to delay his September 8 sentencing date, when he will learn his fate after being convicted for sexting a minor. The New York Post reported that Weiner’s attorney Arlo Devlin-Brown sent a letter to Manhattan federal Judge Denise Cote requesting the date be …

He’s back! Just when we thought she was finally moving on, Huma Abedin has reportedly invited her formerly estranged and currently disgraced husband Anthony Weiner to move back in.  According to the New York Post, Abedin listed the couple’s luxury apartment for rent this month, but changed course a few days later and renewed the lease …

Former New York Congressman Anthony Weiner could get up to 10 years in prison after pleading guilty to sending obscene messages to a 15-year-old girl. The U.S. attorney is asking that the judge impose a sentence of 21 to 25 months as part of the plea agreement that led to Weiner’s guilty plea Friday. Weiner, …