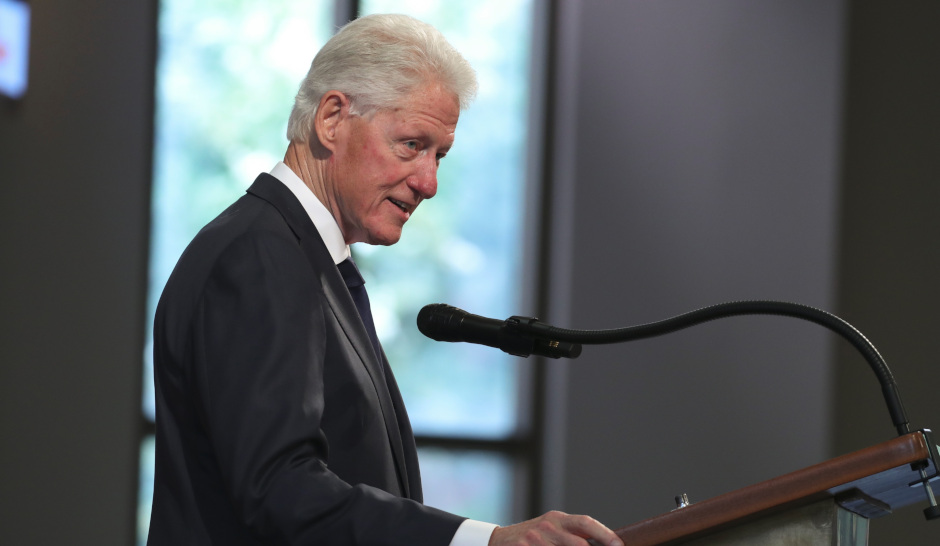 Clinton was on a humanitarian trip to Africa in 2002 for the Clinton Foundation’s AIDS project when the jet stopped in at a small airport in Portugal to refuel. The photos shows Clinton sitting in a chair in the terminal while Chauntae Davies, Epstein’s personal masseuse, digs into his shoulders.

Davies, now in her 40s, described the former president as “charming and sweet” and said he was a “complete gentleman” on the trip, the tabloid said.

Davies said she was recruited by Epstein’s personal “madam” Ghislaine Maxwell while she was studying massage therapy and that the billionaire financier raped her shortly after the recruitment. She says she was sexually abused by the pair until she escaped their clutches in 2005. She said she was asked to serve as a flight attendant on Clinton’s trip to Africa.

“We had a stop-over for the jet to refuel and while we were in the terminal the ex-president was complaining of stiffness from falling asleep in his chair,” Davies said. Maxwell suggested that Davies massage his shoulders, she said, and Clinton asked, “Would you mind giving it a crack?”

“He turned his back to me, and I reached up and I started to rub out the kink in our former president’s neck and shoulder,” she said.

Davies acknowledged the photos may look “bizarre,” but, she said, “President Clinton was a perfect gentleman during the trip, and I saw absolutely no foul play involving him.”

Actors Kevin Spacey and Chris Tucker were also on the five-day trip, which stopped in Ghana, Nigeria, Rwanda, Mozambique, and South Africa.

Although Clinton took multiple trips on Epstein’s private jet, he as denied knowledge of and participation in any of Epstein’s infamous activities, noting that he was accompanied on each trip by foundation staff, his Secret Service detail, and other supporters. Epstein’s victims have either said they so no untoward behavior from him, as Davies did, or not mentioned him at all.

Epstein was arrested on federal sex trafficking charges last summer and died of an apparent suicide in jail. Maxwell was arrested last month at her hideaway in New Hampshire and now awaits trial in a New York jail on charges of sex trafficking and lying to prosecutors.