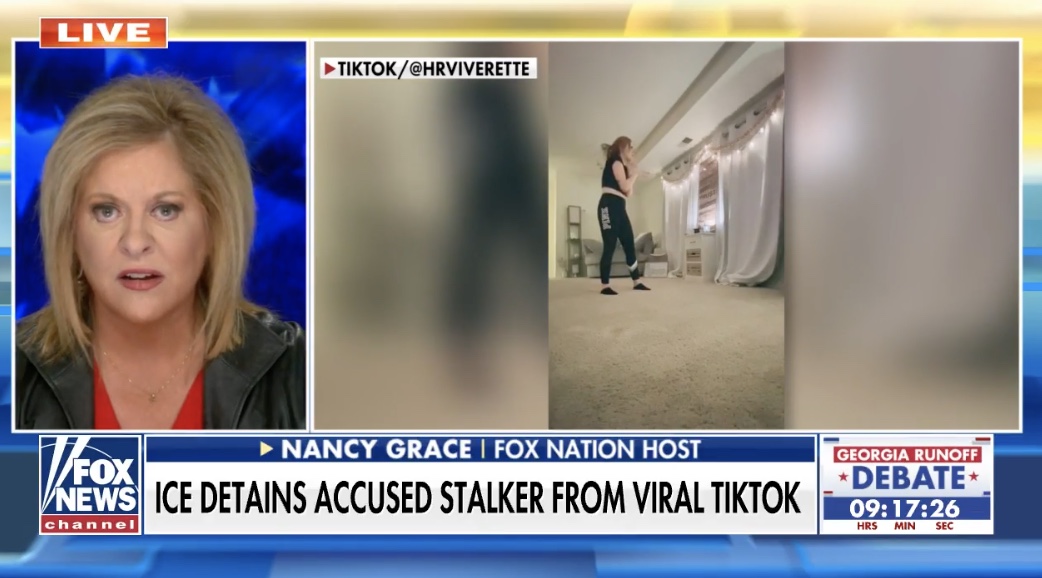 CrimeOnline’s Nancy Grace is angry that people are social media are “poo-pooing” the frightening moment a man broke into a Maryland woman’s apartment as she was dancing for a TikTok video.

“Can I point out the guy crawled up to her second floor balcony and broke in?” an incredulous Grace told Fox News on Sunday. “If this was not nefarious, why not just ring the doorbell?”

Hagerstown resident Hannah Viverette captured the terrifying intrusion on film when Angel Rodriguez-Gomez allegedly entered her second floor apartment from the balcony door, as CrimeOnline previously reported. Viverette fled to a neighbor’s apartment and called police. Rodriguez-Gomez, who lives in the building across the street, was arrested and posting a $5,000 unsecured signature bond to be released, frightening Viverette again.

Her apartment managers are allowing her to break her lease without penalty, however, TMZ reported, and Rodriguez-Gomez was picked up by Immigration and Customs Enforcement agents for reportedly being in the country illegally, CBS Baltimore said. He has an immigration hearing on December 30.

But Grace was stunned he’d be let out on such a low bond and furious at people who think there’s nothing to the crime.

“This guy breaks into her home (and) he is actually ROR, released on recognizance,” she said. “He walked straight out on bond.”

“Legally, you don’t have to come in and commit a rape or a murder for it to be burglary. It’s unlawful entry into a residence of any type for any illegal purpose.”

“But do you know why I’m angry? I’m angry because people are poo-pooing it, because she wasn’t murdered or raped or stabbed or shot,” she said. “What about when this guy puts his foot through your kitchen window?”

Grace also discussed the case of 26-year-old Instagram influencer Alexis Sharkey, whose nude body was found on a roadside four miles from her home on November 29, three days after she disappeared, as CrimeOnline reported.

“I’ll tell you when it’s all gonna sort out, and that’s when we get the medical examiner’s report,” she said. “But I can tell you this. For years and years I’ve studied method and assessment of homicide and suicide. There is no way that a young female of her age bracket — and yes, this has been broken down statistically — would commit suicide naked. Just doesn’t happen. Statistically, doesn’t happen.”

Taking suicide out of the equation, Grace said, leaves “only a few choices.”

“You either die by accident, and there was no indication she’d been run over by a car by the side of the road,” she said, ticking off the possibilities. “She was naked. Was there a sex attack? There’s homicide, and there’s natural causes. So I’m waiting for that toxicology report. What’s interesting — no visible signs of injury, which means if it was murder, it had to be asphyxiation.”