In an upcoming interview on “Dateline,” friend Melanie Gibb describes Vallow and Daybell’s relationship as “gasoline and fire”

Fox 10 Phoenix reporter Justin Lum shared court documents submitted by Melani’s ex-husband Brandon Boudreaux listing witnesses and evidence to be presented at a July 1 custody hearing. The documents show that Melanie Gibb will testify that Melani Pawlowski (listed as Melani Boudreaux  and “Mother” in the documents) visited her aunt in Hawaii in October.  Vallow and Daybell reportedly married there in early November, but there is no indication that Daybell was in Hawaii at the time Vallow’s niece was reportedly there.

In late November,  when police came to Vallow’s home in Rexburg, Idaho, to perform a requested wellness check, they discovered the children were missing. Vallow is believed to have lied about their whereabouts. She also allegedly asked Melanie Gibb to tell police that 7-year-old JJ Vallow was with her in Arizona, even though he was not. Both JJ and his sister, 17-year-old Tylee Ryan, were found dead in Daybell’s backyard last week, leading to Daybell’s arrest on charges of obstruction and concealing evidence

Vallow is in custody in neighboring Madison County, awaiting trial on charges of felony child desertion. 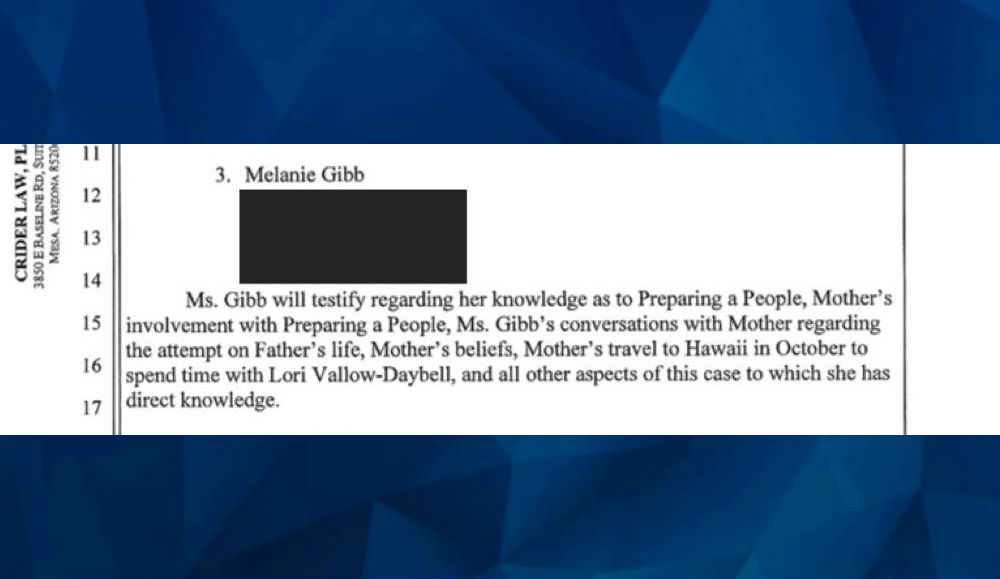 The court documents also reference Preparing a People, a so-called media organization that published books and podcasts about the end of days. Daybell is believed to have been a prominent member, and Vallow and Gibb were also actively involved.

Gibb herself admitted in an interview last month with East Idaho News that she visited Vallow and Daybell in Idaho, after the children were last seen alive. She told reporter Nate Eaton she didn’t think it was alarming at the time that Vallow’s children were not around. She said Vallow told her that Tylee had completed her GED and had gone to Brigham Young University-Idaho.

But in the same interview Gibb also described a visit to the BYU Idaho campus with Chad and Lori, saying that they were publicly affectionate with each other as they walked campus grounds, even though Chad was still married (his wife Tammy Daybell died on October 19.) There was no mention of Tylee in that portion of the interview.

In an upcoming interview on “Dateline,” Gibb will again discuss Lori and Chad’s relationship. In a preview clip, she says that both Lori and Chad were equally destructive — characterizing their dynamic as “gasoline and fire” — but also says Daybell appeared to be in control.

“l saw him as the hand and her as the puppet on that hand,” she said.

Correction: An earlier version of this story reported, based on the court documents, that Melanie Pawlowski visited both Chad Daybell and Lori Vallow in Hawaii in October. It appears that Vallow may have been in Hawaii without Daybell at that time.